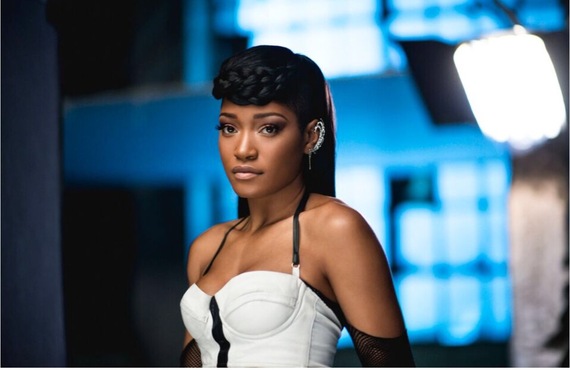 Keke Palmer is the epitome of hard work pays off, and is definitely among the best at what she does. She is a go-getting, tenacious actress who is simply unstoppable. Everything that Palmer seems to touch, turns to gold. She has gone from a childhood star, to a confident and poised young lady that knows exactly who she is, and where she wants to go.

Palmer has earned an NAACP Image Award for her role in “Akeelah and The Bee” and also starred in the hit Nickelodeon series, “True Jackson, VP” in which she won four NAACP Image Awards for Outstanding Performance in a Youth/Children’s Program. Last year, Palmer made her debut on Broadway as the youngest actress and first African-American in Rodgers and Hammerstein’s musical, “Cinderella”. Recently, Palmer starred in the FOX production, “Grease Live!” as Pink Lady, “Marty” and “Zayday” in “Scream Queens”. Simply put, Palmer goes after what she wants, and dominates in everything that she does.

Acting is what Palmer is most known for, however, there is another talent that she has embarked upon as a recording artist. The debut of her first single and video, ‘Enemiez’ features Jeremih, and is definitely a hit.

I had an opportunity to talk with Palmer about her first single, upcoming album, and musical inspiration.

You started out as a childhood actress and your fans are very familiar with Keke the actress, but tell me about Keke the recording artist, and what your fans can expect from your upcoming album.

Well it’s an accumulation of things. I feel like mostly it’s just about what’s happening with me as well as the generation or millennials as a whole. I realized that being an artist wasn’t just about introducing people to who you are, but more so letting them know who they are, as well as telling the stories about what’s happening around you, and actually having reason behind what it is you’re saying. That’s what the album is about. It’s all about different messages from sexuality, to learning how to love yourself, to learning what love is, and recognizing when you need to let go of people in your life. As well as understanding that sometimes things are going to hurt, and they’re going to burn, but time will make you heal. It’s also about everything you’re going through at this age.

Who has been your biggest inspiration as far as your singing career, and how have they inspired you?

I think probably stylistically the person I was most inspired by and studied was Brandy Norwood. I really became obsessed with “Full Moon” when I was thirteen or fourteen, and that’s when I really started getting into that style of singing, and just the control she had over her vocals, and all that type of stuff. As I got older you know, it was other people like Michael Jackson as an entertainer, overall. I loved how he was just doing everything. In his videos he was acting, he was singing, and I just loved the entertainment aspect. The same thing with Beyoncé, she inspired me in that regard as well. Even more so as a female, to see a woman never step down, and to always give it one hundred. I just loved that because I only had Michael Jackson really up until that point growing up. Even though he was before my time, he also drifted through my time, so for me to see Beyoncé grow, and to continue to break barriers, I just loved that she never stopped. She never quit. She just always pushed forward. She inspired me in that way, along with Alicia Keys and Mariah Carey. It was many people.

When will your new album be released?

September. I’m just kind of closing in. I just hit my stride probably last month. It’s a really good freeing feeling. I used to feel like if I didn’t write this song then I can’t sing it. It’s such a great feeling to hear a song that tells a message or a story that I want to share, and actually be able to put my voice on it, and not feel like I’m wearing a suit but to instead become the song and become the emotion behind it. Since I realized that, it’s really become a very fun experience, and I found joy in music again, like I did as a kid.

As far as your new single ‘Enemiez’, how was it working with Jeremih for your first single and video?

It was awesome. I was glad to be working with Jeremih. He’s from Chicago. He’s an amazing vocalist and an amazing writer, so I really wanted to work with him in general. When ‘Enemiez’ came along, I loved ‘Enemiez’ but I felt, we all felt, myself and my A&R included, that there could be something that could really take us over the edge and we were just thinking and trying to figure it out. My manager came up with the idea of putting Jeremih on the track and we were able to lock it down. When we heard him on it we were just like perfect this is the one. He sounds great on it.

You’re a triple threat acting, singing, and soon to be author. What can we expect next from you?

I really want to start getting behind the camera a little bit more. There’s a lot of stuff that of course I want to finish and get started and things like that. But if I would think about what I want to do next, it would have to be creating things for other talents. I’ve been really blessed in my career to have been supported by so many like Queen Latifah, Ice Cube, and the list goes on. So many people have lent a hand to me so I would love to start doing that. I could totally see myself working with children, or my mom and I working with children, and creating a place again where I could give what was given to me. That’s really the next step such as films for others, not just myself. Really creating an environment where people can come and I can be able to create things. That’s the kind of vibe I want to have at some point.

For your younger fans out there who are inspired by you, what advice can you give to them in regards to pursuing their dreams?

To just go for it. Don’t let your mind or your thoughts talk you out of what you know to be true. Honestly, you know in your heart what it is you want, you know you feel it in your gut. What happens in life is you start getting distracted by the outside world and everybody else’s thoughts start trickling into your own head, and then they become your thoughts and then you feel like they have to control you. But at the end of the day, your heart and your gut, what you feel, what you deeply know inside, is what you should follow. Even if you can’t make sense of it in your mind, just follow what excites you. Take it one step at a time. If you like dogs and you have fun with dogs, go work with them at the shelter. Next thing you know, that could turn into you having your own grooming company. You never know. People immediately stop themselves when they don’t understand it. Even if it sounds crazy, if you like walking, walk in a marathon. You never know what could happen.

Is there anything else that you would like to add?

Palmer lends her voice as “Peaches” in the fifth installment of the film “Ice Age: Collision Course” which is currently in theaters. Also, be sure to look out for her upcoming book that will be published later this year, and of course her forthcoming album for Island Records.